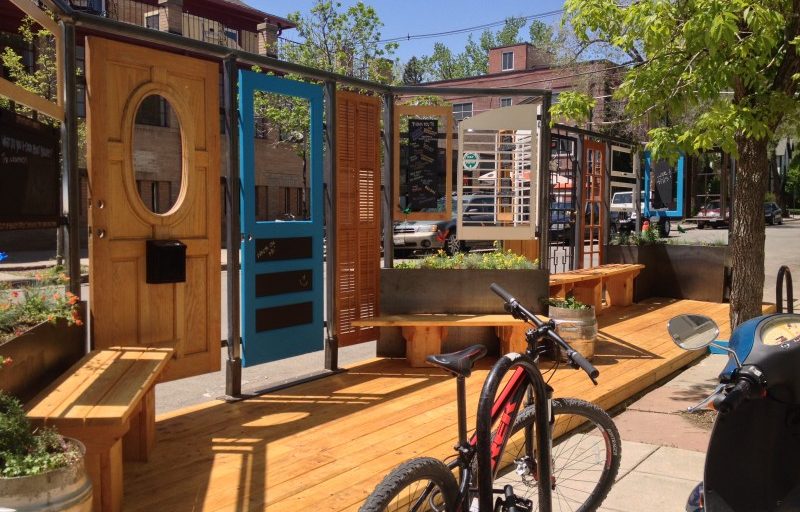 A Design Competition for Boulder’s Parklet on The Hill

In the Spring of 2014, the City of Boulder, CO organized its first ever design competition to design and build a parklet. What exactly is a parklet? A parklet is a miniature, often temporary, park that replaces one to two parking spaces on the street and includes elements such as seating, landscape, and art. The goal of the City was to build a temporary parklet that would enhance the public space on University Hill as a first step in studying the future for streetscape improvements on the Hill.

A team of women, from DTJ and other backgrounds, came together to develop an entry for the design competition. The concept behind their design was “Doors Open, C’mon In” and played off the welcoming nature of the City of Boulder. Visitors come and go to enjoy Boulder’s lively downtown and the outdoor activities in the surrounding foothills, and students arrive as children and leave as educated adults.

The design for the 34’ long and 6’ wide parklet developed during an after work charrette in which the team gathered together to draw and discuss ideas. What developed was a wood deck with planters and benches all wrapped in a semi-transparent wall of repurposed windows and doors. The planters would showcase flowers and grasses all summer long, and repurposed kegs would contain fresh herbs for the local restaurants. Panels on the doors and windows would be chalkboards for visitors to leave their thoughts and answer the question: “What do you a-door about Boulder?”

The team submitted a simple poster for the initial phase of the competition and made it, along with two other finalists, to the second round. For the second phase of the competition they submitted a 10 page document which included imagery, CAD plans, hand drawn details, and a budget for the project. When the winner was announced, the team was shocked, thrilled, and a bit overwhelmed, to have won the project.

In the weeks that followed the Doors Open team paired with a local metal fabricator, Coalesce Design & Fabrication, and an engineer, JVA Engineering, in order to further detail and design the structure. The team began gathering materials: doors, windows, lumber, kegs, and many other items through generous donations from local businesses. Weekends were spent picking up lumber, restudying the details on site, painting the doors and windows, and pre-building sections of the deck and benches.

On the weekend of the build, several of the DTJ staff joined the team to help in the construction of the parklet. On day one, the deck was constructed. On day two, the pre-welded planters were placed, the frame put up, the benches built, and the windows and doors were hung. On day three, the planters were filled, the flowers and grasses planted, and the deck stained. Built with all volunteer labor, the project was a huge success. Throughout the build, local business owners, neighbors, and passing students stopped by to excitedly watch the progress.

A week later the city held an official ribbon cutting ceremony for the parklet, but it was obvious it was already much loved as the chalkboards had been filled with drawings and descriptions of Boulder. In the fall the parklet was taken down and the materials again repurposed, but ultimately it taught those of us involved the value of even the smallest public spaces.