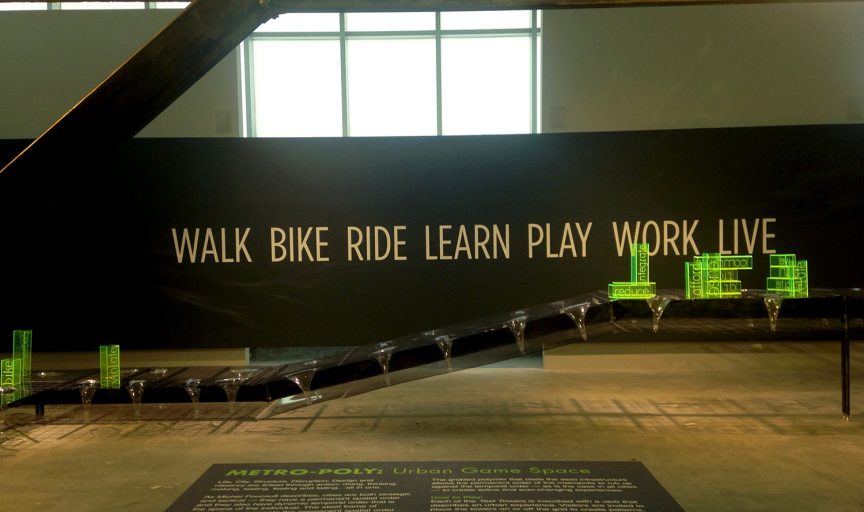 The writing is on the wall, at least for the Design for Healthy Living exhibit that was shown at the Museum of Design Atlanta (MODA). As described on the museum’s website, the show “explores the impact of the built environment on human health and presents specific design strategies that are used to promote routine physical activity and healthy living.” 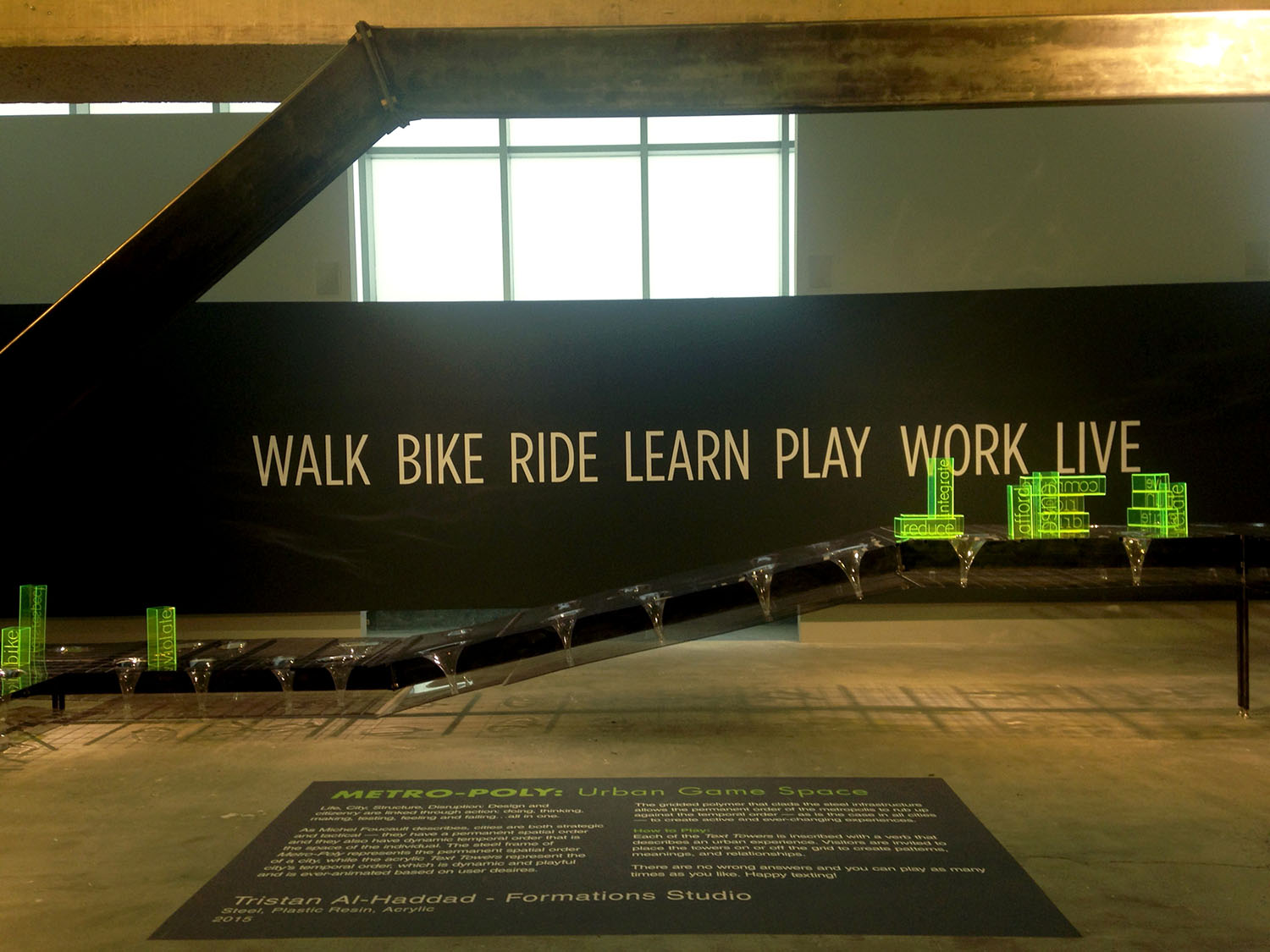 Writing on the Wall

The exhibit is divided into three sections. The first is located in a linear corridor with one side a series of informative boards on the building blocks of a healthy city. The building blocks are: walkability, public transportation, bicycle infrastructure, safe streets, public spaces, healthy food, and nature. On the other wall are feedback cards to “tell us what would make your neighborhood a healthy community”. People from all over the city and region asked for safer places to walk and bike, more community gardens, and better public transit and public spaces.

Interesting fact from the exhibit: “If every American biked an hour per day instead of driving, the United States would cut its gasoline consumption by 38% and its greenhouse gas emissions by 12%.” 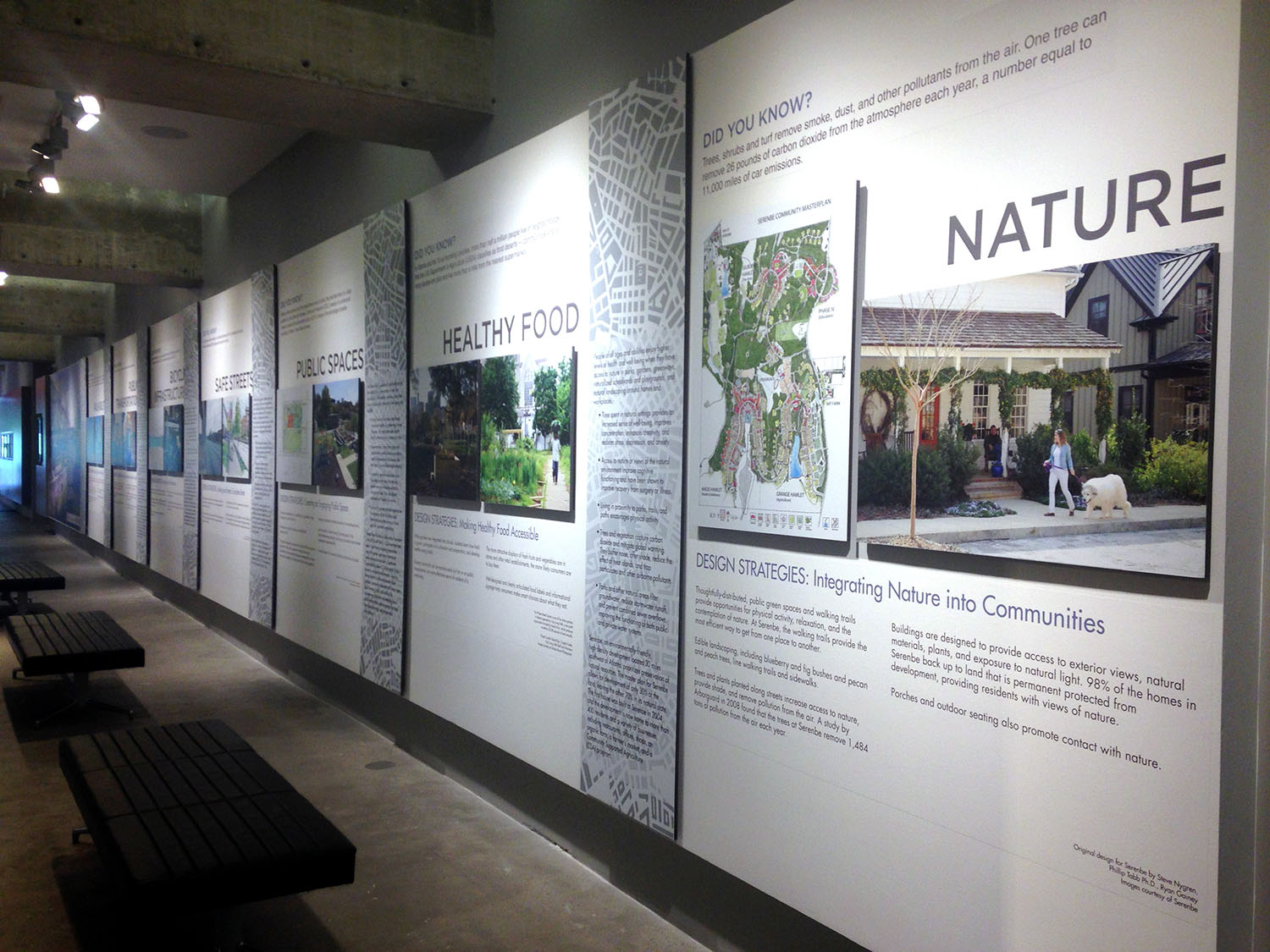 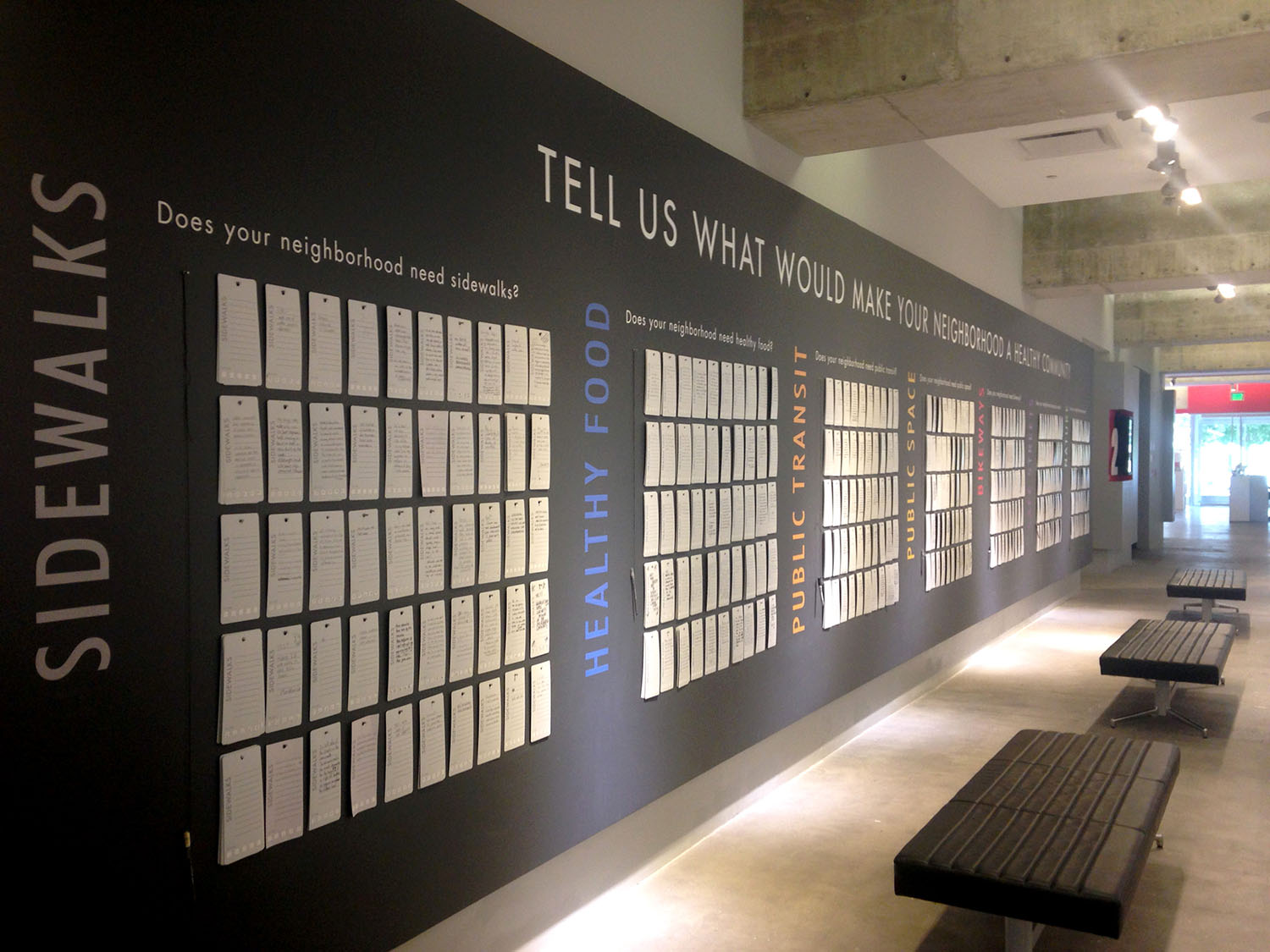 Building Blocks of a Healthy City and Healthy Community Feedback

The second section included an interactive exhibit by Tristan Al-Haddad to spur participants to consider the urban fabric of a city. People are encouraged to stack the bright green plastic rectangular blocks, representing healthy city building blocks, on a clear plastic grid representing the ever-changing urban fabric. Structural steel support beams illustrate permanent structure of the city. In this same room are six case studies. Each study demonstrates how designers and communities have used the building blocks for healthy cities in real world projects. All prove that design for healthy living is doable and show the benefits to each community. Take a few moments to look up the following design case studies. How do they integrate healthy living design principles?

The Atlanta Beltline and Turner Field is the focus of the third section. The room includes informative boards on the Beltline, its origins, benefits and the future plans to complete the 22-mile rail to urban multi-use trail encircling the city core.

A long table with maps of Turner Field occupies the center of the room. The baseball stadium, home of the Atlanta Braves, will be decommissioned after the completion of the new stadium, SunTrust Park. Patrons of the exhibit are encouraged to redesign Turner Field and pin their concepts on the adjacent wall. Improvements suggested included a dog park, a gambling casino, a high rise hotel, high rise condos, outdoor dining, another Olympic Ring fountain, a ‘grassy field for frolicking’, the world’s largest wave pool in place of Turner Field complete with the worlds largest lazy river, a zipline, a covered rock climbing wall, a castle, an enchanted forest park, a bike path, a natural museum with a waterfall…but my favorite is “Quail World”. The concept speaks for itself. 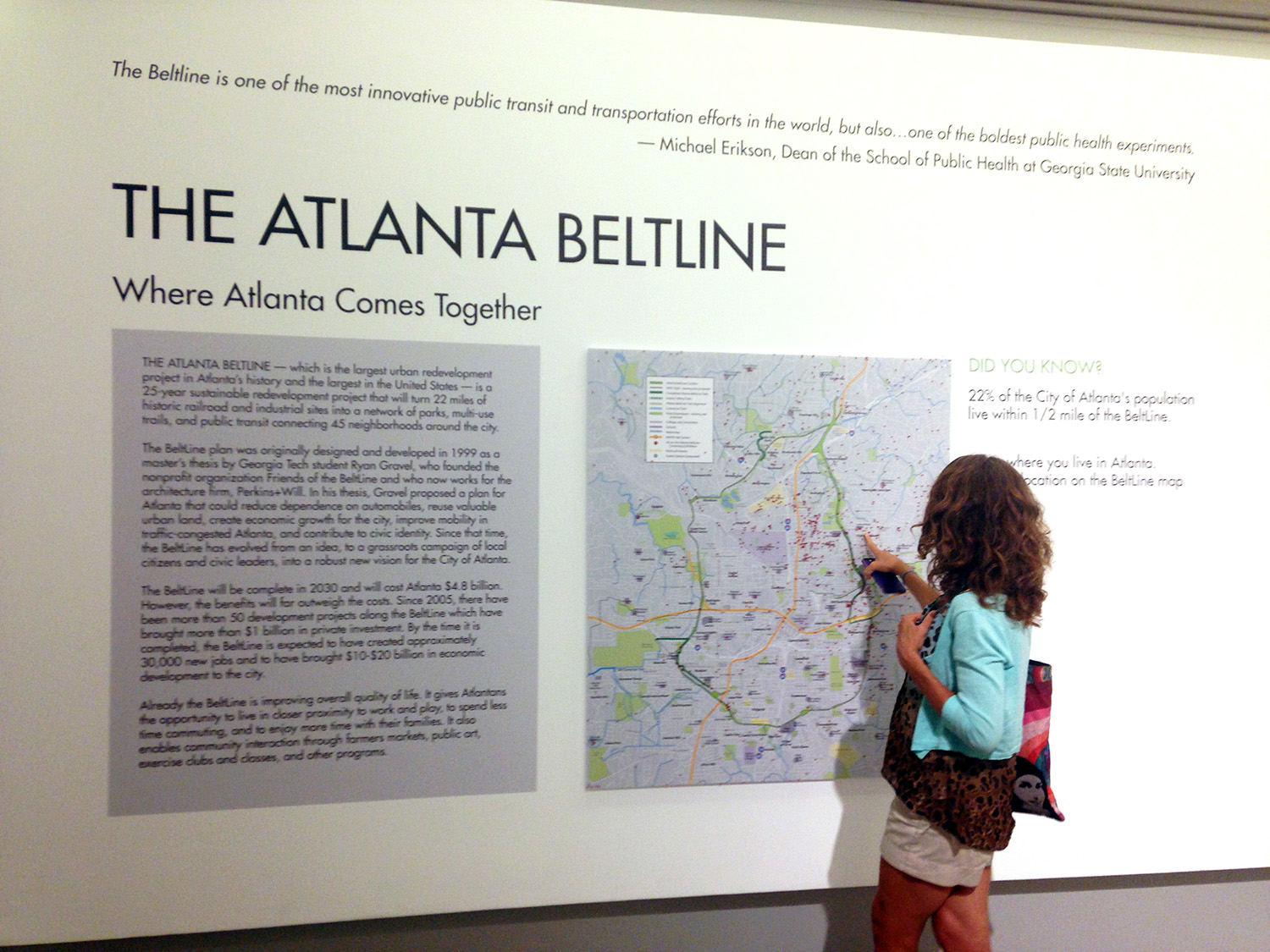 Atlanta is at the cusp of what many hope to see as regenerative design and urban infill. The Beltline, a major catalyst, is planned to encircle the city linking neighborhoods, parks and people. It is slowly recreating and restructuring the urban fabric. The first segment of the trail, the East Side Beltline, has proven almost too successful (growing pains of an overcrowded path and cycle-pedestrian accidents). The high use illustrates the demand for safe, outdoor family trails and active spaces. The act of converting old rail line to multi-use urban trail has spurred explosive growth with $10 billion of economic development projected and an estimated 30,000 permanent jobs anticipated (Design for Healthy Living Beltline exhibit).

“Where Atlanta Comes Together”

Ryan Gravel’s Beltline brainchild thesis, while a Master’s student at Georgia Tech, turned into the largest urban redevelopment project in Atlanta’s history and also the largest in the United States (Design for Healthy Living). One person’s dream for urban revitalization and reduced car dependence is changing the very structure of Atlanta itself. What are the impacts in 10 years? 20? 50?

My take home from the exhibit? This is an exciting time to be in Atlanta and to be a part of the change taking place. This change, of a focus on healthy communities, is not only starting to take hold in places like Atlanta, but it is going strong in other parts of the country, and the world. As a designer, I hope to do my part, small or large, to impact our quality of life for the better. How can we create healthy and safe places, not just to visit, but integrated into our everyday lives? We owe it to our future selves, and the generations to come. 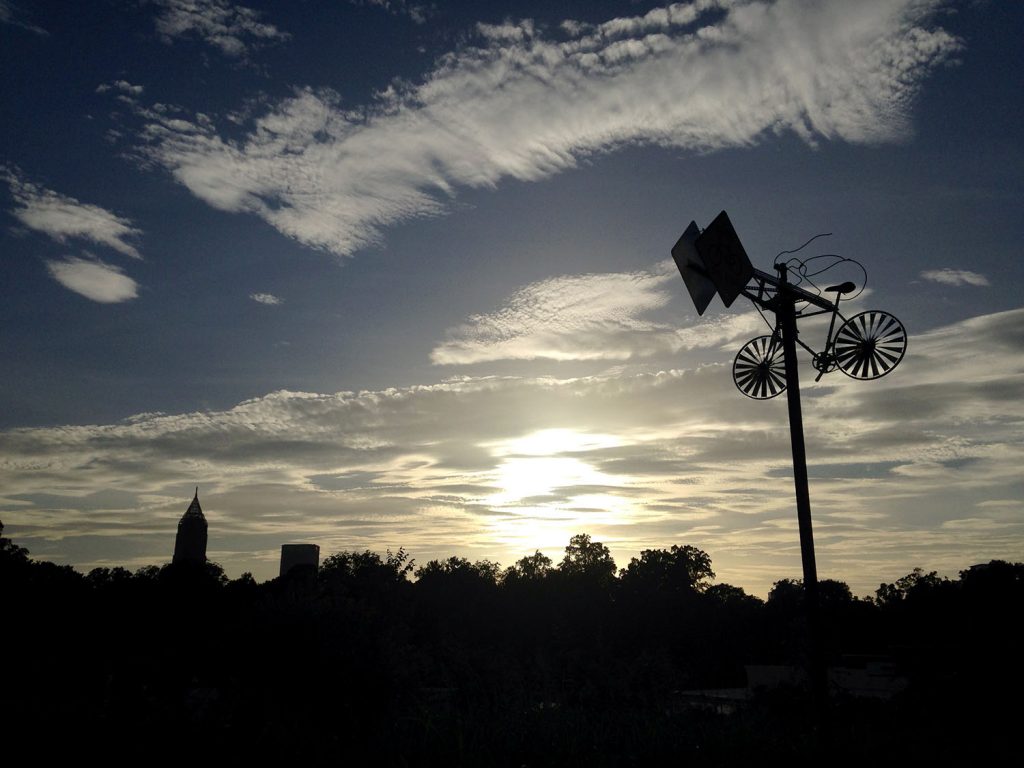 Bike Art on the Beltline

“The health of the eye seems to demand a horizon. We are never tired, so long as we can see far enough.”